The Mayor of Royal Greenwich visits Greenwich Powerchair Football Club at the Waterfront Leisure Centre on Thursday February 21st, for the presentation of the Shea French-Gibbens Memorial Trophy to Emily Campbell for her commitment to the Club over the years.

On Thursday 21st Feb Christine May the Mayor of Royal Greenwich and her Deputy, Councillor Mick Hayes visited Greenwich Powerchair FC.
This was a special occasion when Our player Emily Campbell, one of the longest term members of the club was awarded the Shea French-Gibbens Memorial Award. For her exceptional input to the club. This was presented by Shea’s mother, Viv.
Our Mayor presented Emily with s medal and then had s go at driving one of the Powerchairs, realising how skillful the players are!

On Saturday, November 24th our Powerchair Football coach, Rhea Daly, went to the Coop, Shooters Hill Rd with two of our players, Emily Campbell and David Gale to celebrate that South London Special League has been chosen as their Charity of The Year. The store manager, Victor made us very welcome and we hope to work in partnership supporting our local Coop throughout this coming year.

Above. Another photo from our visit to Coop Shooters Hill Rd to celebrate being Selected as their charity of the year.

This photo is with Adam Reynolds, a player with South London Special League who has been a member for a very long time and now works as a volunteer. He is with Emily Campbell our only female Powerchair football player in the team that plays in the South East England League. 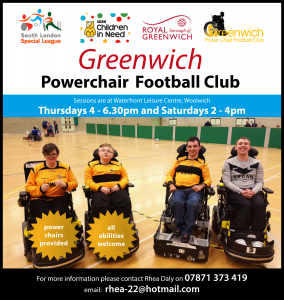 On Thursday May 10th our local MP came to celebrate with us our newly acquired funding from BBC Children In Need.

Matthew has been a great fan of South London Special league’s Greenwich PFC for a few years now. He says that although he wasn’t mad about football at school, he has totally fallen in love with powerchair football and hugely admires the skills of our young players. He was thrilled to be able to join in, supported by our wonderful player Emily Campbell. 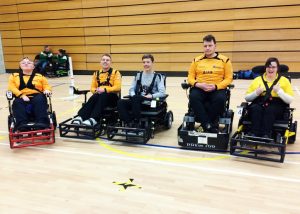 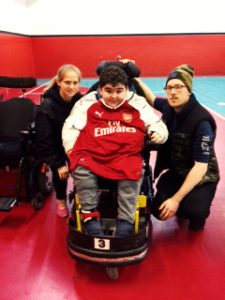 Here is a photo of Jerome Mills in his Arsenal shirt! With Rhea Daly (Coach) and assistant, Aaron Cloke. He’s a member of Greenwich Powerchair FC.

Just to let you know more about our RACE night at the Badgers Sports Club on Friday 24th November. We thought this would be a brilliant way of socialising with every member of the club and its families plus this would also support our fund raising for a new power chair!
Just to let you know that it is FREE to attend and bets are no more than a pound!!!
Before I tell you about all the details please let me explain how the race night works. We have eight races and eight runners in each race. We are looking for a sponsor for each of the eight races which will cost £20. That person would then be responsible of selling the 8 horses in that particular race at a cost of £3.00 a horse. The people who buy a horse for £3.00 gets to choose the horse’s name.
E.G. – I am going to pay £20 to sponsor a Race and then I am going to get members of my family to pay £3.00 each for one of those 8 horses and then they would name their horse. This would then become Race 1. The owner of the horse will receive a prize if there horse wins the race.  (Bottle of wine, Chocolates etc.)
The winning horse of each 8 races automatically goes into an Auction race at the end where each horse is sold to the highest bidder on the night, with a large prize given to the winning owner of this race.
So we are looking for 7 sponsors (I am buying one so that leaves 7) and hope that one of you would pay £20 for one of the races and then get 8 people who would then buy a horse for £3.00

You can bring along as many people as you want. Bring your parents, carers, cousins, aunts, uncles, Nan and grandads, next door neighbours or your closest friends.
If you have any donations for prizes bring them along over the next couple of weeks please.

Thank you
Josie and Rhea

Our First league game took place at Crawley Leisure centre and the players were excited and looking forward to playing. Having had our speed tests completed the players entered the hall eager to play their game. We started the game with Asa in goal with Emily on the right in her new strike force chair and Alfie on the left with Kieran in the middle. The team settled down very quickly and begun passing the ball around very confidently. We were 3-0 at half time and went on to win the game 4-0. A very pleasing result with goals scored from Emily, Kieran, Alfie and an own goal although credit should go to Archie for this goal.

Above. Emily Campbell in her new Strike Force powerchair.

Our second game was against Invictus who scored two early goals which startled our performance. We lost 6-0 which was disappointing for us but an experience that we will learn from.

However we all enjoyed the day and looking forward to our next league game.

Above. With our coaches, Rhea Josie and Aaron