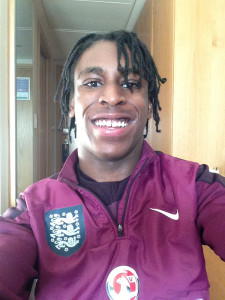 At South London Special League we are doing our best to help Kyle fundraise.

Let’s get some enthusiasm up to help him raise money to buy his new Strikeforce Powerchair costing £7,000 (it’s like the Ferrari of PowerChairs that all the champions use). He has collected £4,000 already but we need your help to raise more!

I have mentioned before that one of our Players Kyle Alexander has been selected as part of the England Squad to play in the Powerchair Football World Cup in Florida July 2017.

This is fantastic. He now plays for a Premiership national club, Sevenoaks, but still trains on Thursdays at GPFC. This is where all his friends are, who he grew up with. To him GPFC is his life. Kyle is a totally committed young player who came to Greenwich Powerchair FC in 2008. This means that he must have started playing when he was 6 years old.

He is now 15 and attends Trinity school in Lewisham. This summer he will be doing his GCSEs.

I think we should follow his adventure to Florida. One of the most important things for Kyle and is family is to save up for a new Powerchair suitable for the World championships. These cost over £7000. Kyle has already raised about £4000. Still a bit to go. Then there is the travel for him and his family. It needs a very committed person with totally committed parents.

At South London Special League we are doing our best to help him fundraise, not forgetting that in 2014 Powerchair Football will be a Paralympic Sport! He will be 23 years old. How exciting to have a Paralympian that started his career with us!